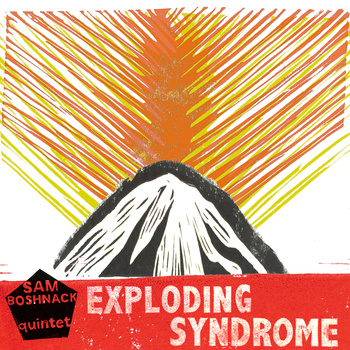 I get a lot of enjoyment out of jazz, but I don’t always understand it. Here is a submission that will take many re-listens to properly appreciate (beyond simply enjoying it): a labor of love called Exploding Syndrome by Washington’s Sam Boshnack Quintet.

Seattle-based composer and trumpeter Samantha Boshnack has worked for many years as a co-leader for the jazz group Reptet and leader of the 14-piece chamber orchestra B’shnorkestra, in addition to collaborating extensively as a session musician. Sam Boshnack Quintet, formed in 2011, was Boshnack’s first turn as leader of a smaller jazz ensemble and this album is the band’s recording debut. This reviewer was honored with the opportunity not just to support a fine West Coast jazz act, but an acclaimed composer’s recording debut as a quintet bandleader, their first stab as director of proceedings for a smaller-scale jazz project, more or less. Sam Boshnack Quintet is Sam Boshnack on trumpet, Beth Fleenor on clarinet, Max Wood on drums, Isaac Castillo on upright bass, and Dawn Clement on keyboards.

Boshnack and her players are punchy and nimble. Overall, it is clear that Sam Boshnack Quintet is a project that is indeed influenced by the Third Stream style, but faintly, really. There is a fair amount of improvisation on this record. Boshnack has mentioned that she draws inspiration from Afro-Cuban jazz– that deceptively carefree rhythmic pattern is a strong force in this music, creating a tone that is sometimes playful, sometimes uneasy, almost grave. Take for instance, Castillo’s solemn riff about four and a half minutes into “Dormant” that the other players hover around with so much crazy energy. What does one call this kind of jazz? Interesting to behold, this much is for sure.

The performances are consistently on point and there is elegance to the checks and balances the band put on themselves– one of Fleenor’s stately solos will never be too far from one of Clement’s abrupt bursts on piano. Contrasting tracks like “Exploding Syndrome” and “Xi” with each other makes the album seemingly an exercise in how to balance antecedent playful chaos and consequent seriousness, a seriousness that, like a lot of chamber music and Third stream, sounds like the positing of a question. It’s pretty and engaging music that will definitely please serious fans of jazz (so, probably more serious than this reviewer…).

I really liked the gentle closer, “Ashcloud”. This is one of the modes of this band that I enjoyed a lot…there’s a bit of that restrained, “cool” feeling, tempered with a slightly uneasy modernity. Mystery and beautiful restraint. For all fans of chamber music, this is most certainly a must-listen.

Check out the band’s Bandcamp and, for my readers in Portland, here’s hoping I will see you on August 20th at Revival Drum Shop for Sam Boshnack Quintet’s west coast tour. 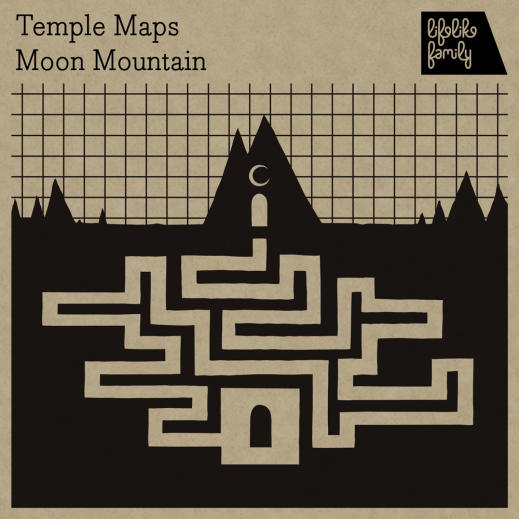 Jay No Parades sent me this release, and then later at a show put on by Lifelike Family, I met and briefly chatted with Elias.

So what can I say about this album? Well to begin with, I was into this record about 30 seconds in. The strange and subtle spell persisted, and I can say that I’m going to give it many re-listens in the future. When I talked with Elias, along with the influence of his past as a sound designer he mentioned his long-standing love for computer games, which I can definitely relate to. So, there is maybe a little bit of a latent connection to “vaporwave” in this music, that immersion in the digital world which I talked about in my review of the Oneohtrix show at the Doug Fir. I think I actually enjoy Elias’s music a lot more though, there is something about it that seems a little more organically pretty, a lot less “postmodern” and “detached” in favor of really evocative composition and design. The stand-out track, “Reluctance Engine” exemplifies these strong points of the record– a slow descent through a weird digital maze, complete with the appropriately artificial-sounding tolling of a distant bell. The really cool thing about the record, like I’ve already hinted at, is that it’s often pretty sharp and clear-sounding, a strong point that no doubt came from Elias’s track record as a sound designer for theater productions. The album has sort of a serious tone, but in the way of a murder mystery or ghost story– it’s a well-done spooky yarn. All the hallmarks of a really good electronic release are here: some ominousness, some playfulness, plenty of cool textures and samples.

This will probably be one of my favorite electronic releases of the year, maybe my favorite, in fact. For my Portland-dwelling readers, be sure to make it out to the release party for this album on Thursday, July 24th at Ground Kontrol. Check the event page on Facebook. See you there! 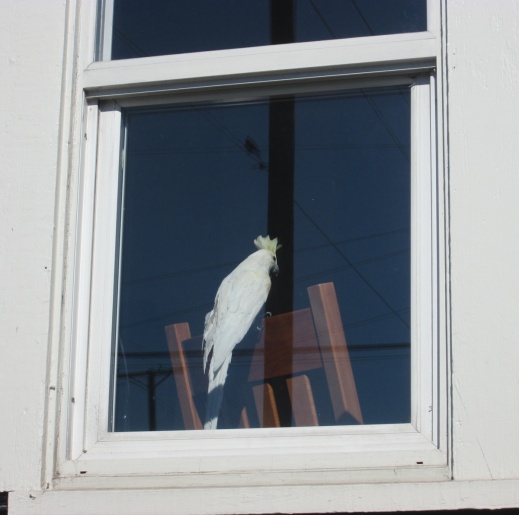 This submission comes from within Portland, Never Been Lonely from 2013 by James Curry IV. James actually released something else this year, an album of electropop-themed music called Apocalypse Freaks, but I especially wanted to spotlight this release from almost exactly a year ago, I found myself getting pretty into it.

James, a Reed college graduate, is a good example of a guy who might almost have too many good ideas. Take for instance, the cover for this record. It’s beautiful, I tell you. But how does it connect to this insane collection of lo-fi noise rock ditties? Basically, what comes to my mind when I study James’s music is the workings of a very rambunctious brain, the sound of a washing machine running off-kilter. Listening to these tunes, I want to dance, I sort of want to sing along, hell, I want to do jumping jacks. When James reached out to me, he cited my review of Consumer at Slabtown as the impetus for his interest in my blog. And like Consumer, James makes crazy, extreme music. One looks at modern music like Andrew WK’s I Get Wet and the now vast variety of rappers that bandwagoned with trap rap, and I can relate James back to all that as well. I’m unsure as whether to peg James as having any kind of focus on irony, but with the way that he’s really proud to let his freak flag fly he connects himself with this sort of manic hedonism– the swag attitude, or the well-meaning “party” attitude.

Overall, this is a really brazen record– this artistic persona that James is pushing in his music is absolutely looney. He doesn’t take himself all that seriously and that’s what I appreciate. Moreover, he has some memorable lines on this album…”Charlene…You’re mean”, “I want to text you my heart, even though we’re two blocks apart”. This guy could really go places. I’d like to direct your attention to his videos for “Head Toss” and “Obscure” off this record, as well as his website. Check him out. Happy listening. 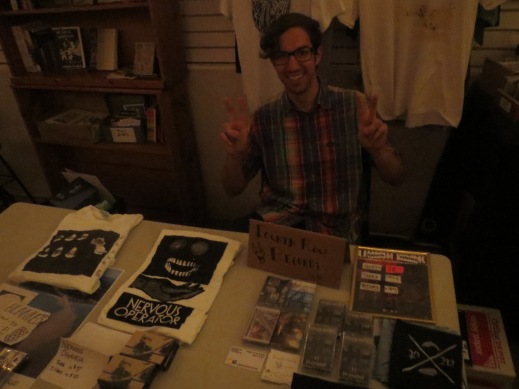 The other night I went out and did something I haven’t done in far too long: I went to a show completely blindly. I hadn’t heard anyone on the bill– the only semblance of familiarity would be in the fact that I was going to the Laughing Horse on 10th and Burnside. I had no idea what to expect and it turned out to be a really great, really interesting night for music– the night was something of a hybrid between noise and emotive hardcore.

I showed up around 9:10 and chatted for a couple minutes with Pathos Mathos, a two-piece screamo/punk outfit from California. They were apparently on their first tour (if I remember correctly), had some awesome t shirts for sale, and it was pretty entertaining to shoot the shit with them about Iron Maiden– real nice guys. At around 9:30 we all got called in for the first group, The Trench. 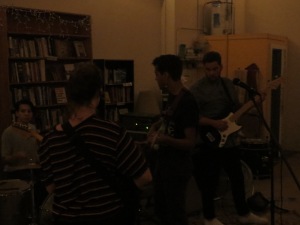 So I would say that The Trench was in that vague musical area of emotive hardcore, post-rock, and slowcore. I feel like I should resist the urge to label bands like this, but you may get my meaning. The Trench are Austin transplants whose emotive, soft-spoken, and somewhat gloomy rock hits the spot. Music like this has such an air of romance to it– hope, dreams, memories, all that good stuff. The American Analog Set has it in spades, if you still don’t get what I mean. I’m sort of annoyed that I currently can’t find a bandcamp for The Trench to direct my readers to…hopefully you will keep your eyes peeled for them. 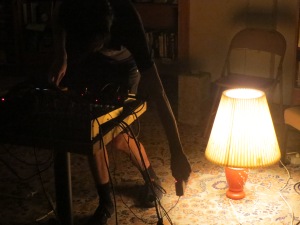 Next up came the two headlining acts, Nervous Operator, followed by Blankets. Nervous Operator’s set got off to a somewhat rocky start: a few minutes in, his set actually blew out the power on one side of the room! However, he kept his cool, and after a little tooling around, he was back in action. The set built very slowly, dark ambience with little voltage spikes of harshness and behind it all, an ominous beat. A lot of modern noise music is influenced by EDM, but I definitely think that Nervous Operator handles this rhythmic aspect of his music very interestingly when compared with his contemporaries. I talked to him briefly after his set, and it turns out that Nervous Operator is this really nice Canadian guy named Spencer Davis. Here is his soundcloud. I hope you check it out! 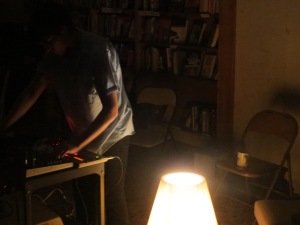 Blankets continued with this very dark, exploratory vibe that Nervous Operator had started.  An eerie hum, obscure rustling and scratching, and towards the end an odd sample of a woman’s solemn voice. Ghostly music that put me in an interesting head space. At times, seeing experimental music can be almost like going to church. Blankets is really top notch dark ambience and noise– here is her bandcamp. I am hoping that both Nervous Operator and Blankets will be able to come to Slabtown for Meanwhile, Elsewhere… one of these days. 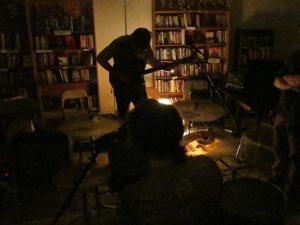 This otherworldly spell was broken temporarily by Pathos Mathos. Like I said, these two were stand-up guys and they made some pretty damn good screamo. Here is their bandcamp. 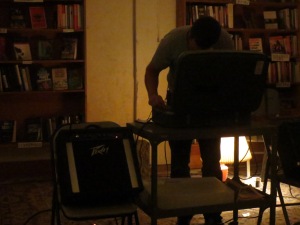 Last but not least was Lady Secrets (maybe named after a women’s clothing store in Gresham, maybe it just had a nice ring): a drillingly harsh wall of noise. It was a fine conclusion to the evening. I walked up and introduced myself, and invited Lady Secrets to come to Meanwhile, Elsewhere…. He was kind enough to gift me with one of his tapes. Here is his bandcamp, on which you can listen to said tape.

One of the best ways to support local music is blind showgoing. What have you got to lose? Build up those connections and support local art. Until later, happy listening!