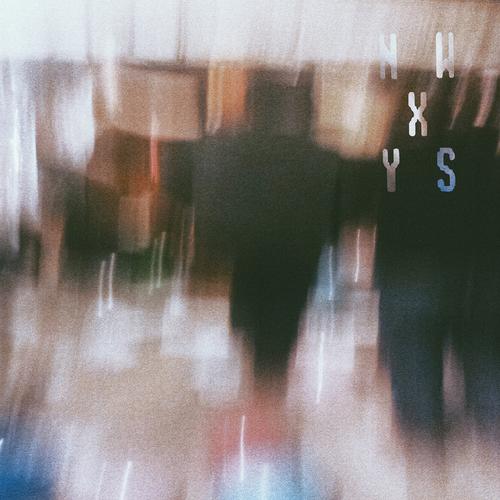 This is certainly one of the most hard-to-pin-down releases I have listened to this year. Seattle’s Newaxeyes are an experimental quartet (Will Hayes and Tyler Coray on guitars, Bret Gardin and Jordan Rundle on synths and other electronics) who make techno with rock instrumentation, synthesizers, and sampling. Their new release “Assange/Church” was released on DivineDroid records last October. They have only been together for roughly a year and a half, but this record shows promise, eclecticism, and assurance.

Newaxeyes find inspiration in a wide variety of styles of music, and have shared bills with psych rock, hip hop, and noise. One of the most ready connections one can make with their music is with post-rock, and this is especially clear on the mini-epic “Assange”. This track sounds like a hard-edged Bowery Electric, a grim techno trip with a crystalline guitar line as the main guide. Just as intriguing is the slightly dissonant closer, “Church”, which starts off with a chirping synth wading through choppy bursts of noise and growling guitar, then abruptly transitions into a weird, murky hip-hop beat. This collective can sculpt left-of-center noise into something danceable, and already I am curious to see what they might produce on a full-length release. They would most certainly be at home at Sanctuary Sunday’s next installment of Accent/Sustain. 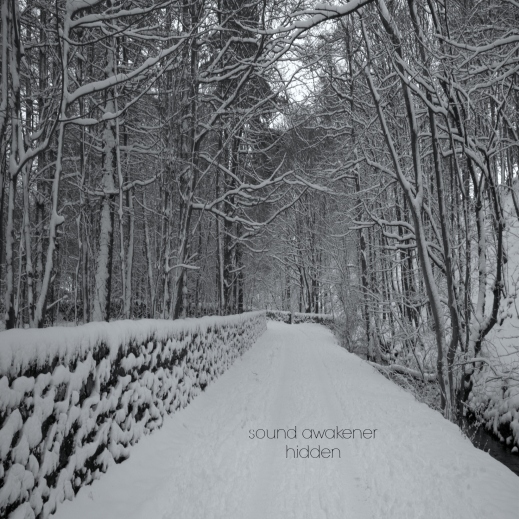 Sound Awakener is the musical project of Vietnamese sound artist and pianist Nhung Nguyen. Nguyen has been clasically trained in piano, however, since 2007 she has focused on training herself to develop her own technique. In 2014, now that she is beginning to seriously produce and release music, she has begun to experiment with modern classical on Five Chapters and ambient on A Dreamy Mess. Her new release Hidden can be seen as the most promising start of the Sound Awakener project getting underway.

Nguyen has described Hidden as being a musical space that’s hidden, but not a shelter. It’s a murky collection of disturbing, thudding, clicking noise from varied origins, most of them mechanical, which were ran through a variety of effects, mostly delay and phasing, to create three electroacoustic pieces. Nguyen’s talent is apparent in spite of the (perhaps deliberately?) muffled and obscured quality of her recordings. It’s strangely hypnotic soft noise– I was particularly drawn into the album’s second piece, “Hidden”. This is a very intriguing collection of electroacoustic pieces, and I am already looking forward to her future efforts. 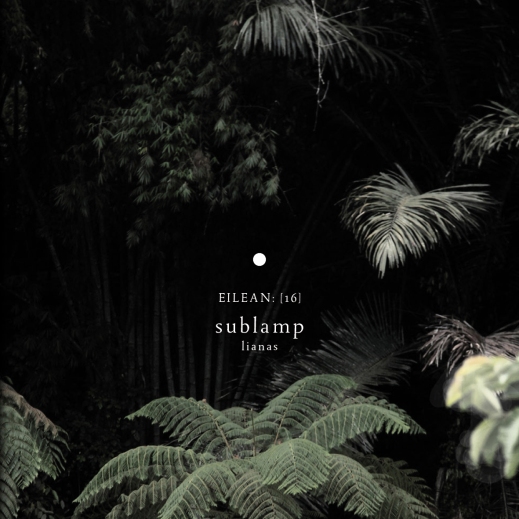 Lianas is the latest full-length album from Los Angeles based sound artist Sublamp (Ryan Connors), released on the excellent French label Eilean Records. The album is made up of three pieces under the twenty-minute mark, preceded by a brief forty second preface. For this album it sounds like Connors mostly relied on teasing soft droplets of sound out of his guitar, though field recordings are also sparingly incorporated into the fabric of this album.

The pieces on this album represent the highest level of discretion and pacing that can be brought to warm drone. Connors’s pieces develop slowly, building up intensity until you’ve become lost in the layers of sound. He doesn’t bowl the listener over with cinematic, sentimental effects, and yet these pieces pull you in with their sense of mystery and wonder, as should be the case with great ambient and drone. Sublamp reminds me a little bit of the Portland based droner Eluder, only while Eluder often has made music that brings you to rather eerie headspaces, Sublamp is much warmer, but nonetheless ambivalent, with a sense of the unknown looming heavily over these drones. Lianas are climbing vines. This album is like a slow journey from out of the darkness of the forest floor, up through the understory, into the canopy, where the scorchingly harsh guitar tone that concludes “Our Bodies Draped in Moss and Cloud” finally leaves us.

Lianas is a work of rare sensitivity and goes down in my mind as one of the best drone records of the year. 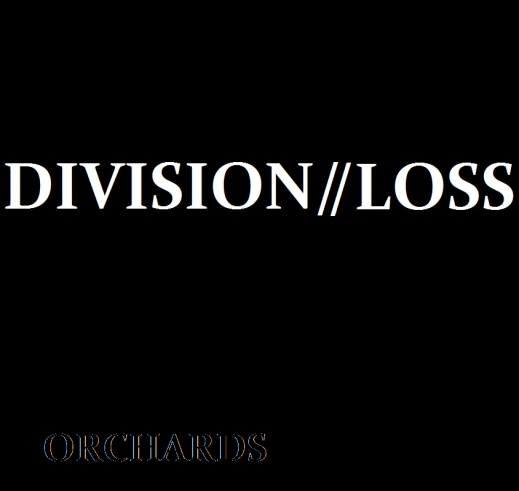 This next submission comes from Salem: Divison//Loss, is the debut release from Orchards. Orchards are cellist Jacob Zeigler, guitarist and vocalist Daniel Remington, guitarist Kelly Klippel, drummer Alex Geiszler, and bassist Patrick O’Driscoll. Right off the bat I can see the hints of a highly original future for this band.

Though they describe themselves as “indie”, they are anything but at all similar to the seemingly endless procession of well-intentioned bands that fashion themselves after Radiohead, Modest Mouse, and now Alt-J. Orchards make downtempo rock that is hard to pin down stylistically– Zeigler, Remington, and Klippel create figures that will be instantly familiar to fans of Godspeed You! Black Emperor and Dirty Three…lots of consonance and melancholy repetition, the kind that we typically expect of slowcore and post-rock. However, Orchards are by no means a jammy post-rock band. Orchards make downtempo, pensive rock ballads, and they cite the influence of the darkwave bands of the 80s as being particularly important to them. However, unlike those bands from the past, they lay off the reverb, and Remington’s pipes make a sound that’s tremulous and vulnerable, rather than the baritone mating call of a mystery man. In fact, the strongest point of Orchards’s sound lies in Remington’s soulfully sad vocals, which, in the context of the group’s overall sound, occasionally remind me a little of Stephen Immerwahr, yet for some reason hint at something there, as yet obscured (though you can see some of it on the refrain of “The Vulture”), that’s a bit more dramatic and emotionally exposed that doesn’t quite fit with the wandering arrangements. It is for this reason that I feel as though Orchards are a group with a sound that’s in transit– it hasn’t quite come into fruition, but they’ve already got something good here. They will be recording a new record this next month, and I’m sure that the dark, dramatic music that’s partially obscured now will come to seed then.

Looking into this band’s craftsmanship, you can see the beginning of a funerary rock group with a highly original style, and perhaps another great album to come out of this city on the horizon. Orchards are in need of putting a little more force behind their music, for I feel as though they occasionally end up sounding like a somewhat unexciting slowcore group without meaning to. However, what can be said is that they should not stop sounding down-to-earth and organic…they aren’t copying anyone, and that’s what’s important. Here’s to Orchard, another new voice from Oregon that I look forward to hearing more from. 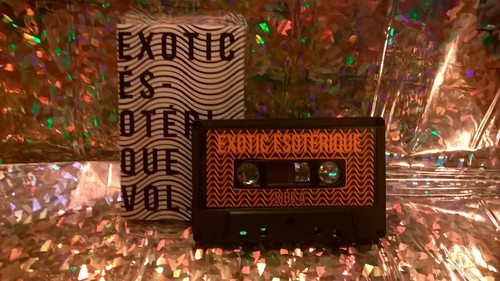 Exotic ésotérique Vol.I is a compilation by Italian experimental music label ArTeteTrA. I feel very honored to have been forwarded a copy of this excellent collection of ambient, psychedelic, and noise music.

There are many high points to this collection for me– the selections leap from occult goofiness that feels very true to the spirit of Rock In Opposition to ethereal atmospheres, making for an eclecticism that falls into order according to a logic of its own, as we all know experimental music ideally should. Most impressive to me (just as a first-time listener) were the selections from Above the Tree (Marco Bernacchia), Nicola Tirabasso, and Babau (a duo who have kept their real names secret). Above the Tree creates electroacoustic music, and one recognizes on his track “Rituale N 12” the slow intensity that builds in his musical spaces. Nicola Tirabasso creates occult-sounding space-electronica in the vein of the Berlin school. But Babau were one of the groups on this compilation that really intrigued me. Their music is ghoulish dark ambient that is apparently influenced by their interest in post-rock and it’s one of their track “Faus” is one of the oddest I’ve heard all year. Here is their website, and I hope that you too will be diving into their work soon.

This compilation touches many bases in its hour-long runtime– there’s deathrock, ambient, electroacoustic paranoia, psychedelic noise…it all adds up to a rather worthy cabinet of curios. You can find the full tracklist for the compilation on ArTeteTrA’s tumblr and soundcloud account. 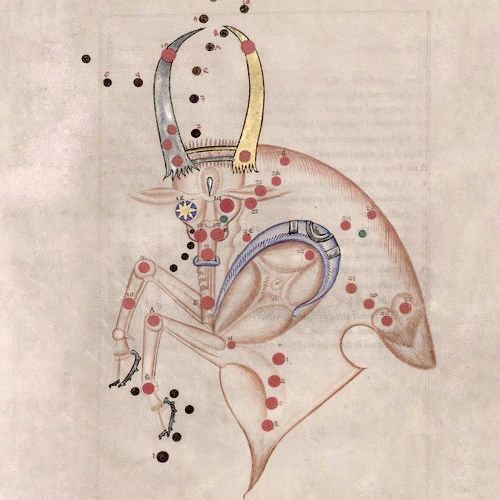 Animal Expert, the debut full-length release from Montreal sound artist Chris Strickland, comes highly recommended to all enthusiasts of noise and musique concrète. The album was released in October on the Vancouver-based label Caduc and was mastered by Joe Pantzer. I am not sure why Chris seemed slightly unsure of his album when he made his submission to me: it’s quite solid.

Though it’s only about an hour long, Animal Expert feels monstrously epic– it takes one on a queasy, unsettling, slightly terrifying electro-acoustic trip. And the auditory beacons with which we have to make do are few and far between: a rocket firing off, liquids slowly sipped, birdsongs, a low male voice, a cat’s ominously amplified purr… these are the recurring reassurances that bookend the sometimes chaotic, sometimes oddly lulling trills, rustlings, and eruptions of the album’s three pieces. Strickland makes extreme sound art that’s nonetheless intended for sensitive ears that will appreciate the silence and near-silence that he returns to again and again — for this work he worked by mixing fellow sound artist Joda Clément’s field recordings with digitally created noise as well as tones created with both acoustic and electronic instruments. The result is a riveting, desolate odyssey.

This is a highly impressive debut. I look forward to Stickland’s future efforts. 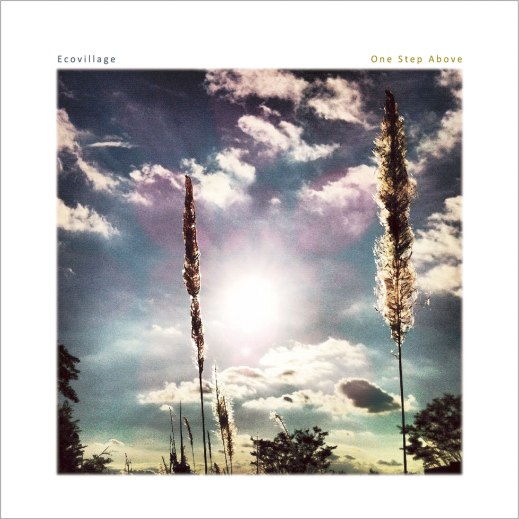 Ecovillage are a dream pop duo from Sweden, and their new album One Step Above will no doubt go down as one of my all-time favorite submissions to this blog, as well as one of my favorite releases from this year!

Ecovillage (Emil Holmström and Peter Wikström) make dream pop for the dub techno and ambient set. Their previous efforts left me with mixed impressions: Phoenix Asteroid and With Fragile Wings We Reach the Sun deserve credit for some attempts to fuse languid pop tunes with ambient exploration and some intriguing spiritual and ecological lyrical themes, but for some reason I felt as though the execution of these ideas fell a little short. The truth is, awkward vocal delivery can make a huge difference on a song. They were on the cusp of making something great, but I was not one-hundred percent on board with Ecovillage with regards to their choice to meld pop melodies with ambience. On this rich, lovely new album, Ecovillage play to their strengths and bring their unique vision of pastoral pop music to the fullest realization it’s had yet.

One Step Above was released on the ambient label Nature Bliss, and though Ecovillage fall in line stylistically with electronic shoegaze producers like M83, their new music also summons up a whole bevy of more interesting loosely associated ancestors: Seefeel is one of the most obvious, but even moreso this record evokes the Arctic ambience of fellow Scandinavian Geir Jenssen. And yet, as I have said, Ecovillage are really rather unique in their approach. To get an idea of what this album is like, think of chilly 90s ambient music with a warm heart– dreamy melodies echoing in a tundra. These songs are for the most part wordless, aside from some spare vocal features here and there, the most memorable of which is Hjalmark Norberg’s on “The Beating of Your Heart”. Though this album is very much minimal in its overall approach, these musical spaces are crowded with delicately beautiful details. One Step Above is one of 2014’s finest hidden treasures and a masterpiece of ambient music.