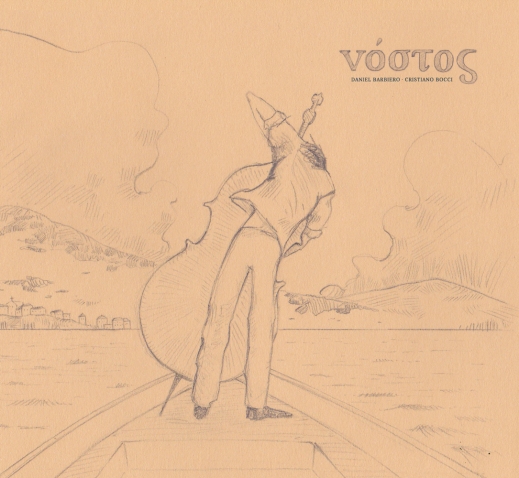 Nostos,  the upcoming release from the Assisi-based label Acustronica by American double bassist Daniel Barbiero and Italian sound artist/electric bassist Cristiano Bocci, lives up to its name by charting a return to the skeletal essentials of the experimental music tradition; this fiercely beautiful album is just eight solo performances bowing and plucking double bass, later disemboweled and distorted by electronics. All that is needed is a single player and some careful sonic manipulation to give birth to a jagged electro-acoustic storm aurally reminiscent of one of Michael von Biel’s string quartets.

There are so many interesting tones that one can only create with acoustic instruments– the distinct growl of the double bass is weighty enough by itself, and when processed to reverberate and cave-into its own shadow, it becomes more ferocious than an electric guitar. Even more essential to the electronic component of the album is the way that the awesome textures of these pieces create harmonies and rhythms within their echoes. There is a garish beauty to these experiments– for a slashing immediacy that meshes with a haunting resonance, Barbiero and Bocci’s collaboration stands out from much modern classical in recent memory. Nostos is slated for release September 15th and comes highly recommended to all fans of modern classical and electro-acoustic sounds.

Other works from Daniel Barbiero and Cristiano Bocci:

“Three Quarks for Muster Mark 2 28 i” by Daniel Barbiero